Is All Stone Veneer Faux Stone?

Natural stone veneer is cut or split from real stone that has formed over thousands of years, as in the case of round or flat New England fieldstone found in abandoned stone walls throughout New England, or gathered from surface stone quarries or farms and fields. These natural stones are the result of pressure during the formation of the earth and ensuing ice ages, resulting in glacial till that is now fieldstone.

Stone veneers are used for exterior house siding and interior walls, stone walls, columns, to reface brick fireplaces and anywhere stone is applied to a vertical subsurface, whether the stone is faux or natural.

What is Natural Stone Veneer?

Man-Made Versus The Real Thing 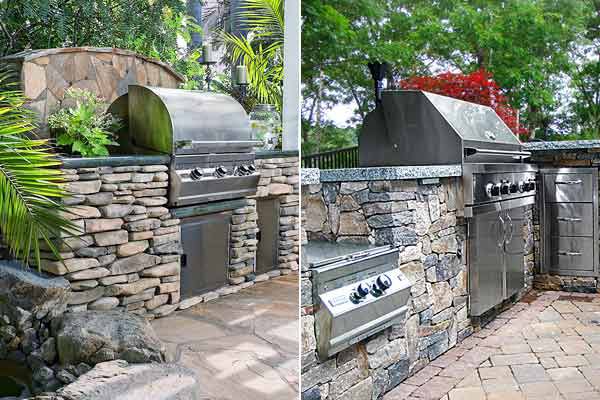 Photo by Courtesy of Eldorado Stone

“At first glance, it’s not easy to spot the impostor in the pictures above. (Hint: Look at the one on the left.) But there are a few key differences between cast stone and its natural-born relative. Artificial stone is less expensive, significantly lighter, and quicker to install. But one good bump can reveal its weakness and spoil the facade. To be safe, keep a few extra pieces of veneer handy in the basement. Natural stone is simply that—rock that has been cut into a veneer ¾ inch to 1¼ inches thick and has all the shading, color, and flaws that come with eons of geologic pressure. It’s more durable and more versatile, but it also costs more to purchase and takes longer to install.”

– All About Stone Veneer, This Old House

Faux stone is manufactured in quantity by mixing cement with stone aggregates and coloring to resemble natural stone or to create a stone veneer that does not appear in nature.

These pieces of cement are roughly 1″ thick and often have color applied to the outside of the cement to resemble different types of natural stone. In a single package of faux stone there will be duplicates.

Since making faux stone is a manufacturing process using rubber molds, casual inspection will reveal duplicate pieces in the project. When using natural stone, no two pieces are or could be exactly alike.

There are advantages and disadvantages to faux stone veneer. It is made from porous cement and is lighter than natural stone. Faux stone can appear to be real stone from a distance, but on closer examination the difference becomes obvious (see sidebar).

Disadvantages of faux stone veneer include no ability to trim stones as each stone is made from a cement cast, then painted and it is very obvious when it is chipped.

The cost of installation may be less for faux stone, which stonemasons will tell you is faster to install. It may be an easier option for a DIY project. However, a stonemason’s primary skill is installing natural stone, and the artistry of doing so varies greatly.

Here are two tips about selecting a stonemason. The two most important points in the selection process are:

1. Ask to see photos of similar stone work they have completed.

2. After choosing your stonemason, have them create a small mockup using the natural stone veneer you have selected, especially for exterior siding, chimney, foundation, or outdoor kitchen.

Both faux stone and natural stone must be adhered to a structural wall over a layer of cement board. Both can be directly applied on a vertical brick surface, such as a chimney or house façade.

For interior applications, both faux stone and natural stone building products are similar in durability, except when chipped. Faux stone will reveal its cement center if the outside color is chipped off. Natural stone is the same color throughout and will last for decades. If color is important for you, natural stone should be your first choice.

For exterior applications such as exterior siding or cladding, the major difference in durability is when the stone is subject to wind, rain, sleet, snow and wide temperature ranges. Faux stone is known to fade after many seasons of direct sun. The stone is tinted with pigments and colors, and unlike your house, cannot be repainted when it fades. Natural stone has already been through thousands if not millions of years of seasons and will remain the same as the day it was installed.

Five Reasons to Use Natural Stone

Choose the stone veneer that meets your needs.

Compare color and shapes, flats and corners, sizes and specifications, and shipping options. Contains the complete Stoneyard Thin Stone Veneer natural stone product line. Fill out the form and we’ll send you info on viewing and downloading our PDF catalogs.